From Mud to Diamond: The Incredible History of Face Masks Clip-on Nose Mask. It’s a piece of clear plastic with a strip of metal that you’re supposed to clip onto the bridge of your nose. With no straps over the ears, the anti-fog plastic merely dangles in front of your face, ready to be blown away by a single sneeze. At 75 cents a piece, you get visible “lip language communication” and absolutely no virus protection whatsoever.

If you want to afford peace of mind with a little tech, a popular appliance company just released a Wearable Air Purifier Face Mask you can take home for $200.

If that’s not enough, an Israeli luxury jewelry brand created a bejeweled face mask made of 250 grams of 18KT gold and set with 3,608 natural black and white diamonds. The mask is N99 compliant and approved by the U.S. Food and Drug Administration and the European Union. The price tag is a hefty $1.5 million.

N95. KN95. P99. P100. These masks and respirators, which could filter 95% to 99.97% of airborne particles, were all the craze when the world first panicked over the spread of Covid-19 in early 2020. Scalpers hoarded these masks, created stock shortages and resold at great profit until the CDC strongly suggested ordinary people donate them to front-liners in the medical field.

Going into 2021, scarcity dictates that few of us wear the 3M mining-grade masks anymore. It’s like we have collectively given up on the health specificities and have now settled into the easy, more comfortable simpleness of the disposable, blue-and-white surgical mask and it’s many cousins: the duckbill, the cone, the cheap and colorful, the store-bought cloth with adjustable rubber ties, and the DIY masks from old T-shirts. 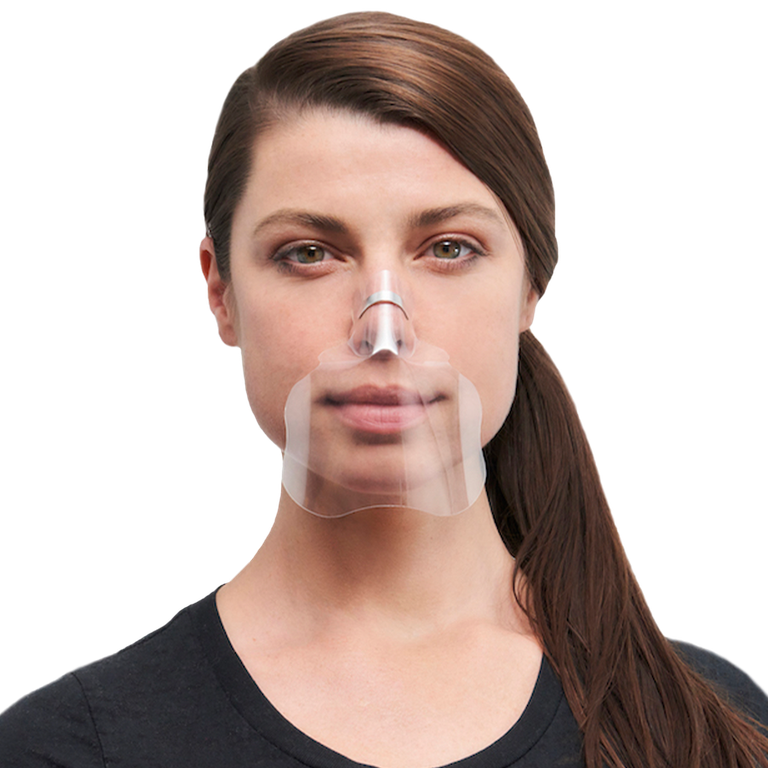 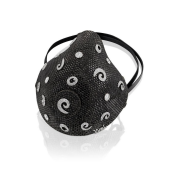 A solution so simple

With Covid-19 and its many variants looming over our grocery runs and pandemic shopping, the world’s Number 1 choice of protective gear is the lowly surgical mask. Worn properly (blue side out, placed over the mouth and over the nose) or improperly (placed just right under the nose), as long as you have a form of covering, you will be granted admittance to establishments that require them.

If you think about it, it does make sense that a disease that can spread by coughing can be prevented by covering the mouth. Isn’t it mind blowing how simple this all is? If anything dangerous is coming through the nostrils, cover them. It’s easy, plain logic. So why didn’t you invent the face mask? Why didn’t I? Who was the human genius that first thought about lumping pieces of gauze together and tying them with a band around the ears? 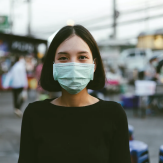 Modern surgical mask for everyday use

The invention of the modern Surgical Mask

His name was Dr. Wu Lien-teh. He invented the surgical face mask we now know and probably love, the precursor to the reliable N95. He was fighting against the Manchurian Plague which spread in northwestern China in 1910. Dr. Wu advised people to wear the mask and restrict travel, the same strategy our governments adopted for the Covid-19 pandemic, 100 years later.

Let us not forget that our present-day health crisis also started in China. History does like to repeat itself. With the Chinese government leaders sporting the humble surgical mask only a few weeks after the spotlight moved from Wuhan (China) to Lombardy (Italy), the frenzy for face covering began. Factories quickly switched from sewing clothes to creating fashion face masks that matched your new supermarket OOTD (Outfit Of The Day). 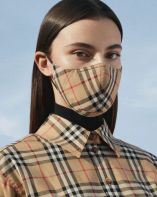 This was not the first time this bizarre vogue swept the world from East to West. In the 14th Century, doctors wore strange face coverings which then evolved into the 16th century spooky-looking costume we now associate with fear and death-- the Beak Mask. This mask was worn in full regalia called the “Beak Suit” which includes a matching wide-brimmed top hat, leather shawl, long robe, trousers, gloves, boots and wooden walking sticks. This Halloween staple was invented by French doctor Charles de Lorme during the spread of a plague called the Black Death.

If you don’t know what I’m talking about yet, it’s a mask made of dark leather, with glass eye sockets and a long beak like that of a bird’s. It was believed that the plague was caused by bad smells known as “miasma” so the doctors stuffed their beaks with herbs, spices, and dried flowers. The disease-ridden air coming from patients was supposedly filtered and cleansed by the concoction before it reached the doctors’ nose.

Thanks to advances in science and medicine, our doctors no longer have to wear the grotesque and rather expensive mask. Moreover, it’s not just doctors who are able to protect themselves now. Anyone who wants to wear a face mask, can do so. 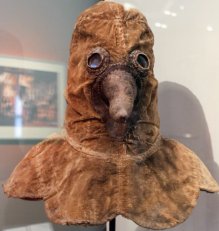 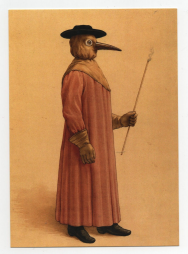 The First Ever Face Mask

Although archaeologists have dug up masks from as early as 9,000 BC, it is difficult to say when the world’s first mask was invented. These masks are typically made of decaying materials so it’s improbable to find material traces of it from ancient times. What we do have are ancient carvings and depictions of masks probably made of hardened mud, wood, and leather, possibly used for religious rituals.

The earliest record of face masks probably used for medical reasons are the images of people wearing cloth over their mouths on the doors of 6th Century BC Persian tombs.

In China, scarves of woven silk and gold thread were used to cover the mouth and nose during the Yuan Dynasty (1279-1368). This is most likely the earliest item that resembles our modern mask.

Dr. Wu’s invention of the modern surgical mask in 1910 initiated the widespread use of the item among medical professionals during the Manchurian Plague and then the Spanish Influenza in 1918. But this invention was not an isolated Eureka moment. It stood on the shoulders of pioneers like the Scottish scientist Robert Brown (1827) who discovered the Brownian Motion which theoretically proved the protective effect of masks on airborne particles. In 1861, French biologist, microbiologist and chemist Louis Pasteur proved the presence of bacteria in air, which made people pay more attention to face masks.

In 1897, Johann Mikulicz wore a face mask he described as “a piece of gauze tied by two strings to the cap, and sweeping across the face so as to cover the nose and mouth and beard.” In the

same year, the surgeon Paul Berger also began wearing a mask. By 1923, over two-thirds of US and European hospitals had surgeons wearing masks in operating rooms and by 1935, almost all of them were using masks.

And the rest, as they say, is history.